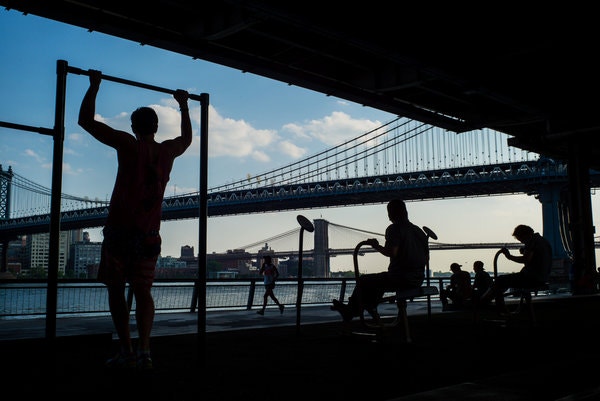 One of my family’s favorite shows is “The Biggest Loser.” Although some viewers don’t appreciate how it pushes people so hard to lose weight, the show probably inspires some overweight people to regain control of their lives.

But one of the most frustrating parts of the show, at least for me, is its overwhelming emphasis on exercise. Because when it comes to reaching a healthy weight, what you don’t eat is much, much more important.

Think about it this way: If an overweight man is consuming 1,000 more calories than he is burning and wants to be in energy balance, he can do it by exercising. But exercise consumes far fewer calories than many people think. Thirty minutes of jogging or swimming laps might burn off 350 calories. Many people, fat or fit, can’t keep up a strenuous 30-minute exercise regimen, day in and day out. They might exercise a few times a week, if that.

Or they could achieve the same calorie reduction by eliminating two 16-ounce sodas each day.

Proclamations that people need to be more active are ubiquitous in the media. The importance of exercise for proper weight management is reinforced when people bemoan the loss of gym class in schools as a cause of the obesity epidemic. Michelle Obama’s Let’s Move program places the focus on exercise as a critical component in combating excess weight and obesity.

Exercise has many benefits, but there are problems with relying on it to control weight. First, it’s just not true that Americans, in general, aren’t listening to calls for more activity. From 2001 to 2009, the percentage of people who were sufficiently physically active increased. But so did the percentage of Americans who were obese. The former did not prevent the latter.

Studies confirm this finding. A 2011 meta-analysis, a study of studies, looked at the relationship between physical activity and fat mass in children, and found that being active is probably not the key determinant in whether a child is at an unhealthy weight. In the adult population, interventional studies have difficulty showing that a physically active person is less likely to gain excess weight than a sedentary person. Further, studies of energy balance, and there are many of them, show that total energy expenditure and physical activity levels in developing and industrialized countries are similar, making activity and exercise unlikely to be the cause of differing obesity rates.

Moreover, exercise increases one’s appetite. After all, when you burn off calories being active, your body will often signal you to replace them. Research confirms this. A 2012 systematic review of studies that looked at how people complied with exercise programs showed that over time, people wound up burning less energy with exercise than predicted and also increasing their caloric intake.

Other metabolic changes can negate the expected weight loss benefits of exercise over the long term. When you lose weight, metabolism often slows. Many people believe that exercise can counter or even reverse that trend. Research, however, shows that the resting metabolic rate in all dieters slows significantly, regardless of whether they exercise. This is why weight loss, which might seem easy when you start, becomes harder over time.

This isn’t to say that exercise plays no role. There are many studies that show that adding exercise to diets can be beneficial. A 1999 review identified three key meta-analyses and other randomized controlled trials that found statistically significant, but overall small, increases in weight loss with exercise.

A meta-analysis published last year found that, in the long term, behavioral weight management programs that combine exercise with diet can lead to more sustained weight loss (three to four pounds) over a year than diet alone. Over a six-month period, though, adding exercise made no difference. Another systematic review from last fall found similar results, with diet plus exercise performing better than diet alone, but without much of an absolute difference.

All of these interventions included dietary changes, and the added weight-loss benefit from activity was small. Far too many people, though, can manage to find an hour or more in their day to drive to the gym, exercise and then clean up afterward — but complain that there’s just no time to cook or prepare a healthful, home-cooked meal. If they would spend just half the time they do exercising trying to make a difference in the kitchen, they’d most likely see much better results.

Many people think of dieting as a drastic and rigid change, with a high risk of putting the pounds back on. What is more likely to succeed is gradual change, made in a much more sustainable way. I also don’t mean to make it seem that weight loss with diet is easy and exercise is hard. They’re both hard. The challenge of a slowing metabolism, and the desire to eat more, occurs in both cases, although dietary change still works better than exercise.

But I can’t say this enough: Exercise has a big upside for health beyond potential weight loss. Many studies and reviews detail how physical activity can improve outcomes in musculoskeletal disorders, cardiovascular disease, diabetes, pulmonary diseases, neurological diseases and depression. The Academy of Medical Royal Colleges declared it a “miracle cure” recently, and while I’m usually loath to use that term for anything in medicine, a fairly large evidence base corroborates that exercise improves outcomes in many domains.

But that huge upside doesn’t seem to necessarily apply to weight loss. The data just don’t support it. Unfortunately, exercise seems to excite us much more than eating less does. After all, as a friend said to me recently, “The Biggest Loser” would be really boring if it were shot after shot of contestants just not overeating.