All Credits go to Tula Karras 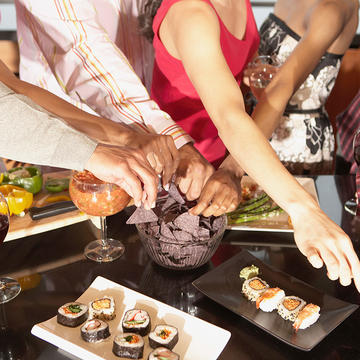 Even if your calendar is packed with happy hour drinks, movie popcorn, and Sunday brunch, you can still lose weight by Monday

After a week of spartan lunches, rigorous workouts, and sleep-depriving presentations, it's easy to feel you've earned a happy hour margarita and a plate of cheesy nachos. But topping off a tough week in this way can undo all your hard work and even pack on the pounds. According to a study from the University of North Carolina at Chapel Hill, women consume about 115 more calories on Friday, Saturday, and Sunday than they do on weekdays. "Those extra 300 to 400 calories can leave you 9 pounds heavier by the year's end," says Barry Popkin, Ph.D., the study's lead author. Fortunately, when armed with the right advice, it's possible to avoid the most common dietary traps while savoring that delicious downtime. And you may even wake up on Monday feeling thinner. Not a bad way to start the week! (Psst—Tack on these 9 Easy Weight Loss Habits to Wake Up Slimmer to the weekend game-plan below to start next week feeling awesome.) Overdoing It at Happy Hour
Alcohol isn't only high in calories, it also diminishes resolve—making it harder to keep your hands out of the pretzel bowl.

Your slim-down solution: Pass on the two-for-one specials and skip the dessert-like drinks—which can contain 500 calories or more—and opt for a tart, spicy, or strongly flavored beverage instead. "You'll sip a Bloody Mary or Scotch more slowly than a frozen daiquiri," says Keri Gans, R.D., a New York City spokeswoman for the American Dietetic Association. Another key factor to consider is where you sit, says Bonnie Taub- Dix, R.D., a dietitian in New York City. Position yourself right in front of the free bar snacks and you're tempting fate. It's a good idea to eat when you drink, but the calories in peanuts, chips, and buffalo wings can add up fast. A better strategy: Order an appetizer, or even a healthy meal, says Taub-Dix. (Skipping drinks to sweat is another good option. And it's not a lame idea, either! The latest fitness trend says fitness classes are the new happy hour!)

SATURDAY
Shopping on an Empty Stomach
You're stuck at the mall, practically ready to chew off your own arm. Oh, look, there's the food court, and don't those cinnamon buns look good?
Your slim-down solution: Stash a snack in your bag—even if you're keeping your shopping spree short. "The best portable options have no more than 200 calories and pack 5 grams each of fiber and protein," says Taub-Dix, who recommends packing a slice of whole wheat bread spread with almond butter. Granola bars are another nutritious grab-and-go choice. "Look for those with fewer than 8 grams of sugar each, such as Kashi TLC chewy granola bars," says Taub-Dix. (Be ready when hunger attacks with one of these 10 Portable High-Protein Snacks).

If it's lunchtime and you're famished, go ahead and visit the food court—just pick a restaurant that allows you to build your own meal. Whichever counter you end up at, follow these rules of thumb: "Start with a lean protein base that's grilled, not fried, then pile on steamed vegetables," says Patricia Bannan, R.D., a dietitian in Los Angeles. "And request calorie-rich sauces and dressings on the side." At Panda Express, for example, you might order grilled chicken, then mix in some steamed broccoli, mushrooms, and string beans. In the mood for Mexican? Consider a black bean taco loaded with veggies, such as fresh salsa, corn, and peppers, at Chipotle. Still tempted by that sticky mountain of baked goodness? Because you're already in indulgence mode, splurging on that cinnamon bun can be easy to justify. "Redefine your idea of a treat," says Bannan. Pamper yourself with a nonfood item instead—say, a pretty new nail polish or bracelet. (Visiting one of these 9 Chain Restaurants with New Healthy Fast Food Options practically guarantees a waist-friendly meal. Munching at the Movies
Cinematic treats are hard to resist, but with a medium popcorn-and-soda combo weighing in at 1,600 calories, you can do serious dietary damage at the concession stand.

Your slim-down solution: BYO treats. We know, this sounds like the kind of advice your no-fun grandma would give you. But it's the surest way not to OD on calories at the multiplex, says Taub-Dix. The smartest choice is to pop a 100-calorie bag of popcorn at home and stash it in your purse. Or go totally gourmet with homemade healthy popcorn recipes with tricked-out toppings.Didn't plan ahead? Try splitting a small non-buttered popcorn with a friend (225 calories and 6 grams of fat for half a bag). "If you're craving sweets, have a piece of gum or share some dark chocolate," says Taub-Dix. Or order a box of Sour Patch Kids. They make your mouth puckery, so you're less likely to overdo it.

Dining Out
You've been waiting all week for this opportunity to really indulge—after all, it's date night, not diet night!

Your slim-down solution: Choose dishes with names that denote a healthy cooking method. "Au jus (cooked in broth), braised, broiled, baked, and grilled all get the green light," says Bannan. "Skip anything described as creamy, crunchy, crispy, batter-dipped, or sautéed—words that suggest it's loaded with calorie and fat-laden cream or oil." (This handy Restaurant Menu Decoder makes it easy to choose!) Want to try everything? It's the perfect time to share. According to a recent study, the average restaurant serves an 8-ounce steak—more than twice the USDA-recommended serving size. "Unfortunately, most people eat the majority of what they're served," says Bannan. If your date doesn't want to split an entre, ask your server to bring only half to the table—and pack the rest in a to-go box. Brunching with Abandon
For many women, this mid-morning meal is an excuse to scarf down two meals' worth of food. (Unless you decide to make your own—in which case, we've 15 Brilliant Brunch Recipes for Your Best Weekend Ever.)
Your slim-down solution: Eat a piece of fruit and some lowfat yogurt first thing in the a.m. "Having a little something beforehand will curb your hunger, so you're more likely to resist that muffin basket," says Gans. Then, when you get to the restaurant, be especially vigilant if there's a buffet: Research shows that people served an assortment of food took in 44 percent more calories than those who got one dish. Scan the spread and select two or three things that look really good. "When you stick to just a few foods, you feel satisfied more quickly," says Gans. One of your picks should be eggs, which keep you fuller longer than starchier breakfast staples like bagels or waffles. Go for a veggie omelet or even eggs Benedict (ask for the hollandaise sauce on the side) and you'll get a dish that feels celebratory but has less than 350 calories.

Watching a TV Marathon
The couch and Netflix are calling and you're more than ready to listen.
Your slim-down solution: Reinvent your Sunday by taking advantage of the fact that you can schedule a two- to three-hour fun, calorie-torching activity, like a hike, bike ride, or a beach volleyball game with friends. If you don't have any heart-pumping plans, intensify your regular workout. "Use the weekend to shake up your routine with something new," says Debi Pillarella, a spokeswoman for the American Council on Exercise. "You'll burn more calories than usual because your muscles have to perform at their peak when doing an unfamiliar activity." So give that Tabata class or hot yoga studio a try, or just pop in a new workout DVD. We've also got next-level Fitness Tips to Toughen Up Your Workouts if you just want to stick to your normal Monday-Friday routine.