All Credits Go To : Elizabeth Narins and Ashley Oerman 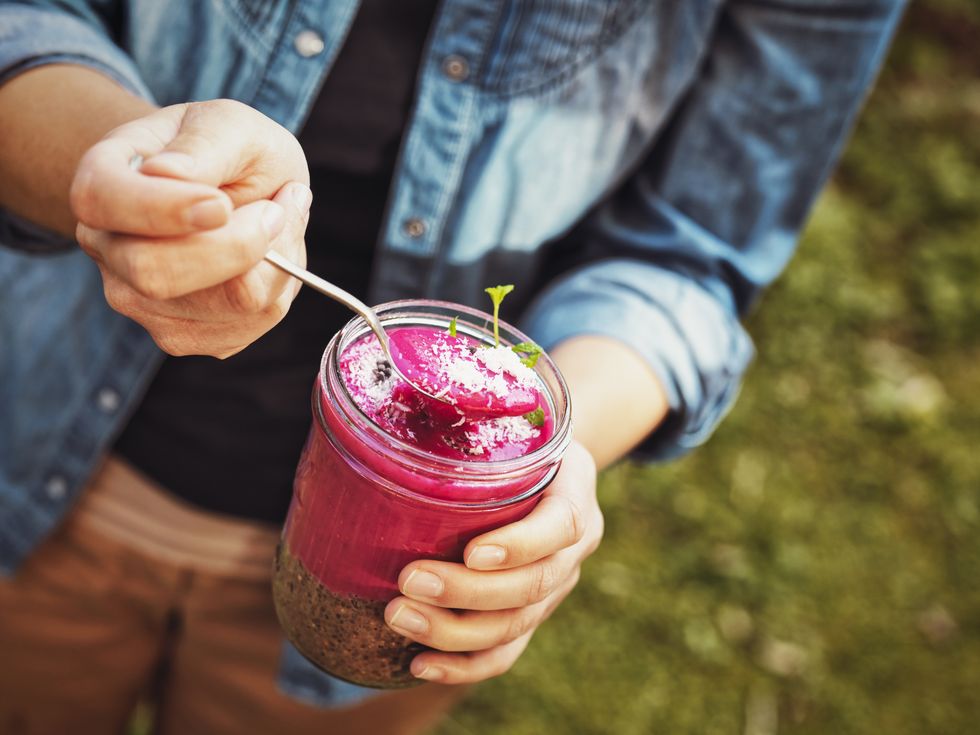 If you want to lose five actual pounds by next weekend, listen up: Losing weight fast is almost always unhealthy. That's because it can set you up for binge-eating and fluctuations that interfere with long-lasting results, which basically defeats the whole point, right?

It’s also effing hard! "For most people, it’s very, very difficult to lose more than one to two pounds of body fat in a week," says Philadelphia-based weight-loss physician Charlie Seltzer, MD. And even if you lose some water weight in the process, the change is temporary. "It’s fat loss that changes [your body's] shape," he says.

Even if you do meet your goal, it's nearly impossible to keep off the weight over the long term: "The amount of restriction required [to maintain that number] will make you so hungry that you’ll eat everything in sight—it’s survival instinct," Dr. Seltzer says. And since calorie restriction gradually slows your metabolism, your body will be less prepared to burn the foods you binge on, he adds. That could mean gaining more pounds than you lost in the first place.

Still, there are effective and healthy ways to kick off your weight loss—and, yes, it will take time!—all without starving yourself, wasting money on sketchy supplements, or punishing your body with exercise.

Instead, try a few of these safe, proven tips. And remember: You’ll get the best, longest-lasting results from changes that don’t leave you exhausted and dreaming of pizza.

"Eating fewer calories than you burn will help you lose weight—it’s that simple," Dr. Seltzer says. "But you need to know your patterns before you can make a plan."

To assess how much you’re actually eating to maintain your current weight, Dr. Seltzer recommends using MyFitnessPal. Just input whatever you eat, and be honest. The app will calculate your daily calorie intake without judgement (or any math on your end). "No food is inherently good or bad," Dr. Seltzer says.

In a small-ish study of more than 1,000 people, published in the Journal of General Internal Medicine, researchers found those following vegetarian and vegan diets, rich in whole grains, fruits, produce, nuts, and legumes, lost more weight than dieters on other plans—even the low-carb Atkins diet—over the same time span.

The researchers hypothesize that participants who abstained from animal products dropped significantly more pounds since plant-based foods include loads of filling fiber and slow-to-digest complex carbs. Though more research is needed to confirm these results, the study authors write, "Vegetarian diets appeared to have significant benefits on weight reduction compared to non-vegetarian diets." 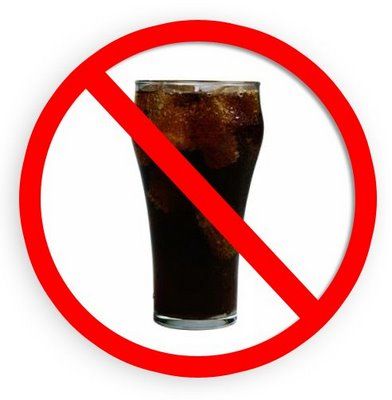 When you drink liquid carbs, like the sugar in soda, your body doesn't register them the same way as, say, a piece of bread, according to a review of studies published in Current Opinion in Clinical Nutrition & Metabolic Care. That means, even though you're taking in calories, your fullness cues aren't likely to signal that you're satisfied once you finish off a can. And that can lead to consuming more overall.

Even calorie-free diet soda might keep you from reaching your goals. Though the reason for increased risk for obesity isn't clear, recent research suggests that artificially sweetened soda could stimulate hunger hormones, leading people to consume more calories than they need.

If you’ve been eating fast food for years, get real about your approach: You’re probably not going to stick to an organic, gluten-free, paleo overhaul for very long. "You want to change as little as possible to create calorie deficit," says Dr. Seltzer, who insists the best way to support sustainable weight loss is to incorporate small changes into existing habits. So instead of giving up your daily BLT bagels in favor of an egg-white wrap, try ordering your sandwich on a lighter English muffin. Or say you eat a snack bar every afternoon: Swap your 300-calorie bar for a 150-calorie alternative. "Your brain will feel the same way about it, so you won’t feel deprived," he says.

5. Go ahead: eat your largest meal at night.

Also some research shows that the human body is primed to consume most of its calories during daylight hours. But the lifestyle is problematic for many: Because family meals and dinners with friends often are scheduled for after sunset, "people who try to stop eating after 7pm can’t do it every day for the rest of their lives," says Dr. Seltzer, who supports an alternative strategy: Eating a hearty meal at your regular dinnertime.

After all, when you run out of calories too early to go out to dinner with friends or satisfy a bedtime craving, you’re more likely to fall victim to what Dr. Seltzer calls the "f*ck it" effect—when you break one "rule" and give up for the rest of the night.

To prep his patients for success, Dr. Seltzer tells them to plan around a large evening meal by eating a lighter breakfast and lunch—NBD since most people who eat a meal before bed tend to wake up feeling relatively full, he says. Research suggests balanced bedtime meals may also promote steady next-day blood sugar levels, which also helps with appetite regulation.

"It's just easier for people people to eat at the end of the day, and this approach ensures your social life doesn’t take a hit," he says.

6. Get your protein from lean food sources.

Dietary protein is one of the most important tools in your weight-loss arsenal, partly because you expend more energy digesting protein versus carbs and fat, Dr. Seltzer says. But it’s often packaged with naturally-occurring fats that amp up the calories of each serving.

When eaten by itself, candy and other sugary foods flood the bloodstream and clear out quickly, leaving you hungry again or tired, Dr. Seltzer explains. Protein slows this the release of sugar into the bloodstream so you can get your fix and feel satiated for longer.

Like protein, fiber slows the rate at which your body plows through carb calories so you feel full for longer and maintain steadier blood sugar levels, one reason why research consistently links fiber intake to weight loss. That means fibrous whole grain bread tends to be a better choice than white bread and also explains why fruits, which contain fiber and valuable vitamins in addition to sugar, beat straight-up candy every time.

Skimp on fluids, and your body will release an antidiuretic hormone that leads to water retention that could affect the scale, Dr. Setlzer says. While this sneaky effect is one reason why the scale is a poor measure of body mass loss, you can outsmart it by drinking more—particularly if you fill your glass with water or non-calorie alternatives like unsweetened coffee and tea.

Booze delivers seven calories per gram—more than carbs and protein (four calories per gram)—without filling you up or delivering essential nutrients. And because it chips away at your inhibitions, it makes those French fries at the bar look way better, and that late-night pizza stop a go.

In other words? "Drinking makes you more likely to eat sh*t," Dr. Seltzer says, referring to drunk foods. At the same time, he stops short of asking patients to quit alcohol cold-turkey to lose weight. Plus, research suggests you don’t have to, as long as your intake is moderate—i.e., less than about a drink a day. "If you drink a glass of wine every night and notice you eat more afterward, eat less early to account for this," he says. "Or, if you’re drinking four glasses of wine a week, drink three instead so you’ll won’t feel such a big difference."

"Anytime you’re stressed, you probably go for food," Dr. Seltzer says. (Have we met?!) That’s because cortisol, the stress hormone, stokes your appetite for sugary, fatty foods. No wonder it’s associated with higher body weight, according to a 2007 Obesity study that quantified chronic stress exposure by looking at cortisol concentrations in more than 2,000 adults’ hair.

It’s why no weight-loss journey is complete without a stress-management tactic: Maybe it’s meditation, calling your mom after work, or chilling out with music. Just make sure it’s hunger, not stress, that leads you to the kitchen.

"Poor sleep is associated with slower metabolism, and the more you’re awake the more hours you have to eat," Dr. Seltzer says. What’s more, the sleep deprivation activates the same brain receptors responsible for the marijuana munchies, according to a 2016 SLEEP study.

Although it’s way more fun to take up a tolerable activity (i.e., watching Netflix on the elliptical) than it is to drop tasty foods from your diet, "exercise won’t help you lose weight in one week," Dr. Seltzer says.

After all, "resistance training might initially contribute a pound or two due to the body’s inflammatory response, and people who do low-intensity exercise might burn calories, but they often end up eating more or subconsciously moving less throughout the day to conserve energy," he says—and research supports the theory.

Real talk: It could take weeks or months to see the metabolic effects of exercise on the scale, and even then, building muscle, which is denser than body fat, could lead to weight gain. "Do what you like because it’s good for you," Dr. Seltzer says, noting the way exercise is awesome for your heart, mental health, and more—and that not all measure of progress can be seen on the scale.

In what is perhaps the biggest buzzkill of all time, sex doesn’t quite count as cardio or burn a significant amount of calories: Women burn about 3.6 per minute. "It’s still a good idea," Dr. Seltzer says, citing the activity’s other benefits, like increasing the output of the neurotransmitters serotonin and dopamine, which naturally reduce food cravings.
Tweet Like Pin Post Plus